He has 8 heart conditions. She has a rare cancer. Together they’re running the Boston marathon. Little Tessa Booth has been an inspiration to Fort McMurray runner Blake Crossley. 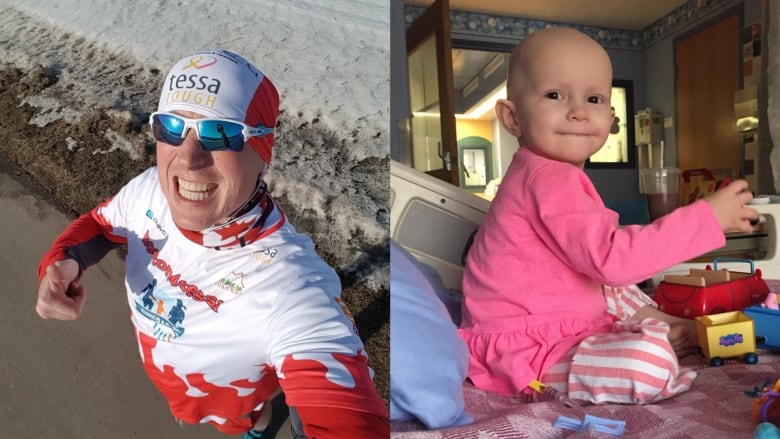 Blake Crossley, left, and Tessa Booth, right. The Fort McMurray girl has endured several surgeries and weeks of chemotherapy after being diagnosed with Plural-pulmonary Blastoma or PPB.

A Fort McMurray man with eight heart conditions is running Monday in the Boston Marathon.

And if that wasn’t enough, Blake Crossley is dedicating his run to a three year-old girl with a rare form of lung cancer.

With the words “Tessa Tough” emblazoned across his running headband, Crossley will run for Tessa Booth, a Fort McMurray girl who has endured several surgeries and weeks of chemotherapy.

“I take a lot of inspiration from the Booth family,” Crossley said in an interview before he was to leave for Boston for the event. “I don’t think you can really compare my heart issues to theirs.”

Tessa Booth is a ball of energy.

One minute she’s in one corner of her home in the Fort McMurray subdivision of Timberlea. The next, she’s prancing off to her room to play with her plastic Shopkinz toys or reading one of her favourite books, Peppa the Pig. It’s hard to believe that almost two years ago, the lively toddler was in and out of hospital battling a sudden cancer diagnosis after the 2016 wildfire.

The cancer, Pleuropulmonary blastoma or PPB, is so rare that Tessa is now the subject of research study.

She’s in remission and on May 12, she will celebrate her first “cancer-versary,” or one year of being cancer free.

For almost two years, Crossley has been running half marathons in Tessa’s honour and to raise awareness about her sickness, said Tessa’s mom Dawn Booth.

“I think it was a couple weeks after Tessa was diagnosed and he asked me, ‘Dawn, can I run on behalf of Tessa,?'” she said. “And I thought it was so inspirational.”

Running with a whole lot of heart

Like Tessa, the odds have been against Crossley as well.

In 2003, doctors were “astonished” after medical tests showed the then-triathlete was living with eight heart conditions.

Crossley also offers this description: his heart’s electrical circuitry and plumbing is “screwed” and the structure of it “wouldn’t pass inspection.”

In 2011, doctors installed a pacemaker in Crossley’s chest but forbade him from taking part in any activity that would put sudden strain on his heart.

Had Crossley continued racing unchecked, something could have gone terminally wrong.

“I am just thankful nothing did happen,” the 43 year-old said. “There was a period you didn’t think you would be back at this point (competing) but I am.” 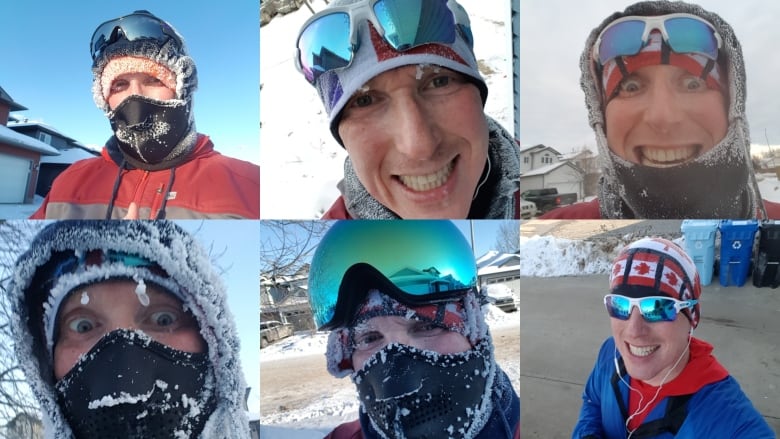 Even in -40 weather, Blake Crossley would head outside for training. (Supplied)

Crossley has worked with a special trainer over the last three months to build up the stamina to take on the sustained pace of Monday’s race. That has included training in the worst cold of the winter.

“This winter has been crazy. We are sitting out here in April and it is still -13,” he said.

He qualified for the world-famous marathon through a charity called the National Organization for Rare Disorders when he told them about Tessa’s story. It and other charities have spots reserved for eligible athletes who are running and fundraising for a cause.

Crossley has raised $6,597, exceeding his goal of $5,000.  All the money will go toward a charity to help raise awareness about little-known sicknesses.

The Boston Marathon will be the first full marathon for Blake since doctors found he had an irregular heartbeat 15 years ago. When he looks back it all, he said, it has been a long road.

“When your body’s hurting and you feel like crap, you just stop and think about what Tessa has been through.”